Samaria or the Samaria Gorge is one of the main sights in Crete. Every visitor to Crete, whether has already heard or will soon hear about this beautiful gorge, the "gorge", as they call Samaria the locals with admiration for its beauty, but also to distinguish it from the others smaller gorges in Crete.

The gorge of Samaria is located in western Crete, in the mountain range of Lefka Ori. It is the longest gorge of Europe with 18 km. length.

The gorge starts from Xyloskalo (1227 m altitude) on the plateau of Omalos and ends at the seaside village of Agia Roumeli in southern Crete.

Flora and fauna in the Samaria National Park are extremely rich. In the gorge you will find unique plant and life species protected by international conventions.

It is reported that there are 450 species of plants in the gorge and according to the law, nothing can be removed from the area of ​​Samaria, not even a flower. Do not see it as a strict law, but as the only way to protect the sensitive ecosystem of Samaria to continue to admire thousands of visitors every year.

In Samaria you will admire its forests with the huge pine trees and cypresses, a picture of the past of Crete when the island was covered with forests well known for their good quality timber, ideal for making sturdy ships.

Inside the gorge you can meet its famous inhabitants, the chamois of Crete, what the locals call "kri - kri".

The wildcat is an endemic spiece in Crete and you are most likely to meet some in the village of Samaria, as they often approach the last village houses.

The village of Samaria 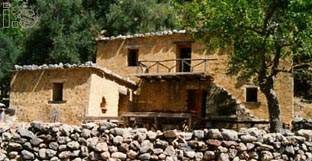 The village of Samaria is located just before the middle of the gorge and was evacuated in 1962, when the founding of the National Council was declared  Forest. The old houses still exist and are used by the guardians of the park.

The village of Samaria is a good opportunity to admire the traditional Cretan architecture.

It is also a relaxation point about mid-distance. Opportunity to stimulate forces with a sandwich you will hold with you.

A little further down the village is the church of St. Mary (14th century), from where the name Samaria originates.

The path to Samaria is well marked throughout its length and is considered to be the most walked footpath in the whole of Greece (the second is the path to Olympus).

It is rather impossible to get lost, since you are constantly moving in a human stream anyway. There are taps in various places, like toilets.

On the right you see the map of Samaria, which is printed on the back of the ticket you will buy at the entrance to the gorge. 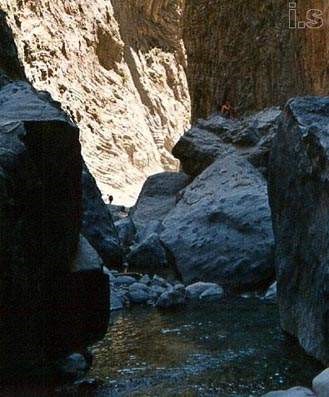 Samaria cannot be considered a simple walk for those not familiar with hiking.

Everyone can cross the gorge as long as there are no serious health problems, but they should be prepared for a strong grip on their feet the next day.

A good pair of hiking shoes is essential, as well as sunscreen and hat. The most tiring part of the route is the last 3 km. after your departure from the National Park.

The landscape after leaving the gorge becomes dry, without any shade. If you started walking early in the morning, you will arrive at this point early in the afternoon when the heat of the day is more noticeable.